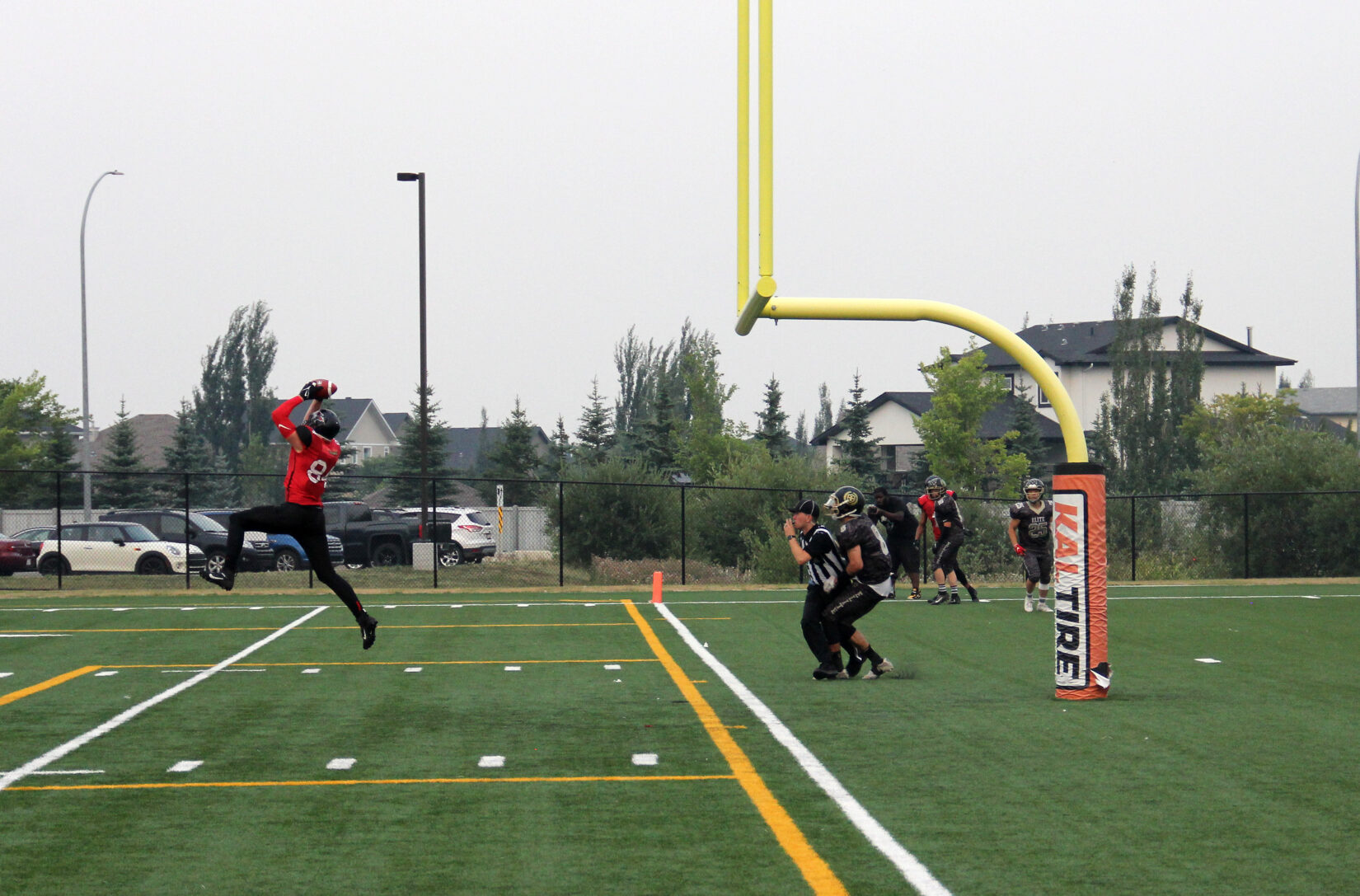 The first seed in the Alberta Football League belongs to the Central Alberta Buccaneers thanks to a wild fourth quarter comeback.

The Bucs defeated the Edmonton Elite 46-42 on Saturday, after trailing by 21 points at the half, to lock up first place in the AFL and home field advantage throughout the playoffs.

“It was a rollercoaster. It was up and down, but we never gave up,” said receiver Braydon Epp.

Central Alberta rolled early, opening up a 14-7 lead. Kurt Howland scored his second touchdown of the season on the opening drive and quarterback Brandon Leyh found Axsivier Lawrence down the sideline with a 50 yard TD pass.

The early success was short lived. Edmonton responded with touchdowns in quick succession to make it a 21-14 game. With the Buccaneer offence stalling, the Elite took the opportunity to build on their lead with a touchdown pass from Andrew Taylor to Tyler Storie to make it 28-14.

Things went from bad to worse for the Bucs when  Edmonton returned a punt for a touchdown to make it 35-14 less than three minutes into the second half.

Leyh’s offence responded with a pass to Matthew Leyh down the sidelines, but the Elite quickly re-established their 21 point lead as Storie picked up his third receiving TD of the night to make it 42-21.

“There was a moment there we could have quit. Our quarterback took a pretty nasty shot and I don’t think anybody would have blamed us if we packed up the tents and got ready for the playoffs,” Epp said.  “But, we didn’t give up. We kept moving the ball, which hadn’t been an issue all day, and we made some plays where we needed to in all three phases of the game.”

Down to the final three minutes of the third quarter, the contest was all but over. Storie intercepted Leyh in the endzone and it looked like time had run out on any possible comeback attempt. But, the Buccaneer defence managed to pick up a a two and out on the ensuing drive, and before the clock hit zero’s in the third Leyh delivered a touchdown strike to Lawrence.

Down 14 points, the Bucs elected to go with a surprise onside kick, and it worked, with Ty Page clearing the way for Chad Wiebe to recover the onside attempt. The AFL’s most productive quarterback did not squander the opportunity his special teams unit provided, as he found M. Leyh for his second touchdown of the night.

Momentum continued to swing in the Bucs favour on the next drive. Needing to stem the bleeding, Taylor tried to move the ball through the air but was picked off by Dario Viveros.

The Buccaneer offence took the ball and moved it into scoring position, setting the stage for Epp’s monster tying touchdown catch. Acting as a tight end— a rarity in Canadian football— Epp got open near the goal line and Leyh found him with a 40 yard strike.

“Brandon made an incredible throw. It was a new play design we put in this week to get behind that middle linebacker. The play broke down a little, and there was some backyard football involved, then Brandon threw it and I just thought get up there and get the ball. I turned and saw the safety coming towards me, and it was time to go through him. I haven’t been in the endzone this year, and that’s where I like to be. When it’s you and one other guy on the two yard line, you want to get in.” Epp said.

After putting the extra point through the uprights to tie the contest 42-42, Bucs kicker Aideen Samadi made the heads up decision to boot the ball through the endzone on the ensuing kickoff to give the Bucs a rouge, and the 43-42 lead.

Then it was time for the defence to go to work. Needing to protect a one point lead, the defence stepped up as a unit to force a pair of two and outs. Samadi added a field goal late in the fourth to extend the lead to 46-42, leaving Edmonton with one last drive to tie the game with two minutes on the clock. In their biggest moment of the season, the Buccaneers defence answered the bell, forcing a turnover on downs.

“I think it just shows this team is as special as we think it is. I’ve been part of Bucs teams where we would have imploded and it would have been the same old Bucs; taking bad penalties and not getting it done when it matters. This shows we have something special here. I’m really excited to see what we can do in the playoffs,” Epp said. “That was easily the biggest touchdown of my career. To bring in the ball to tie the game after being down 21, personally, that meant a lot.”

The victory earns the Buccaneers the first seed and an AFL Semifinal date with the Airdrie Irish at Great Chief Park in Red Deer, on Aug. 21. The action gets going at 6 p.m.

The Irish picked up a huge win over the Calgary Wolfpack to earn their spot in the semis, and will undoubtedly be looking to embrace the underdog role as the four seed. Their 1-3 record could have easily been flipped if not for losses in close contests against Edmonton and the Cold Lake Fighter Jets.

The Buccaneers know they need to bring their best performance if they hope to host the AFL Championship game on Aug. 28.

“Airdrie has never been the team that quits but now they have the talent to back it up. They’re going to be ready for us. They’ve been hanging in with the best talent in the league all year. We need to have a good week of practice leading up to this because we’re going to be in for another battle this week,” Epp said.