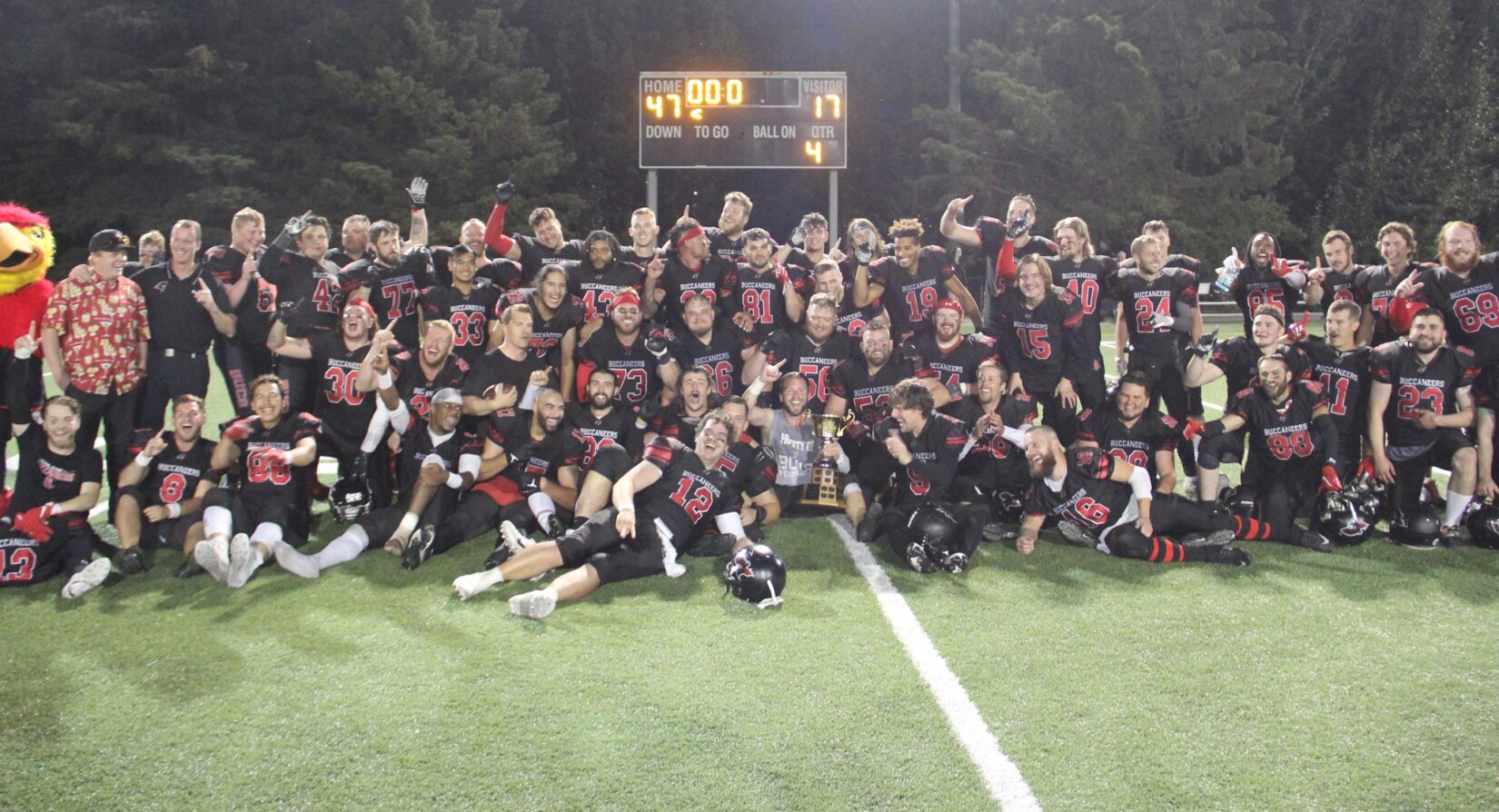 After 20 seasons and in the club’s fourth trip to the Final, the Bucs got over the hump with a dominating 47-17 win over the Edmonton Elite. Fans at a packed Great Chief Park flooded the field in celebration as the clock hit zeros, sealing a dominant victory for the home side Buccaneers, who lead the contest from start to finish.

“You play football to play football. Win or lose, I love this sport, and these guys. Even if we lost this game today, we were still champions. But because we bought in as a team, we all trusted the process, and most importantly we we all loved each other, this is a symptom of that,” said Buccaneers linebacker Todd Lewis.

The victory is especially sweet for players like Lewis, who completed his 13th season with the Buccaneers on Saturday. When they entered the league in 2002, the Bucs were considered a hard working group of guys, but the work did not translate to success on the field.

Regardless of the result, year after year, the same people kept coming back, and win, lose, or draw, a culture was born. Today, there are members like Dave Henderson who just had his number retired after being part of the Buccaneers in some capacity for their entire history.

Many of the current Bucs have endured three championship losses after spending more than a decade with the team.

“This isn’t the culmination of one season. This is the culmination of countless men, volunteers, supporters, fans, and sponsors putting in blood sweat and tears for the last 20 years. This championship means a lot to this program,” Lewis said.

On the field, the Bucs put on a show for their fans with stellar play in all three phases of the game. Quarterback Brandon Leyh was lights out again, 19-year-old Blake O’Conner looked unstoppable on the ground and picked up his second touchdown of the season, Pascal Plante crossed the goal line twice from the jumbo package, and the Buccaneer receiving corps did what they had done all season.

Tylor Johannesson and Axsivier Lawrence both hauled in second half touchdown receptions to put the contest out of reach. Ben Hnatiuk made an outrageous one-handed catch down the sideline, and both Braydon Epp and Matthew Leyh had key receptions.

On the defensive side of the ball, the Buccaneers bent but didn’t break and made huge plays when they needed to. Mark Fay had two key interceptions, Johannesson had an interception returned for 50 yards, and Dave Cuthbertson had an interception he returned for a touchdown in the dying minutes of the fourth quarter. Adam Kuntz also had a strip he retuned to mid-field before hearing it blown dead. Further review revealed Kuntz stripped Elite quarterback Andrew Taylor clean. The front seven had a monster night, putting pressure on Elite quarterbacks all night.

“This isn’t just for now, it’s for the future. We have tons of young players, have proven we’re a championship team finally after four championship visits …. This means a lot,’ said an emotional Lewis.

It was utter jubilation as the final whistle went and the culmination of 19 seasons of effort from the thousands of players, volunteers, trainers, and fans who have worn the Buccaneers logo, was realized.

“How can I even begin to explain my emotions. This isn’t just a football team, it’s a family of literally over a thousand men and women, who have all played a role in this team finally winning It’s first championship in its 19 year history. For me, this is the greatest feeling in my life. I’ve set records, and won a few MVPs over the years, but individual awards don’t come close to this. Not even a little bit,“ Johannesson said. “ Thank you to all my teammates current and past, you’ve all had a part in this championship. I’m so damn happy to bring this home for every single person who cares about this team as much as I do.”