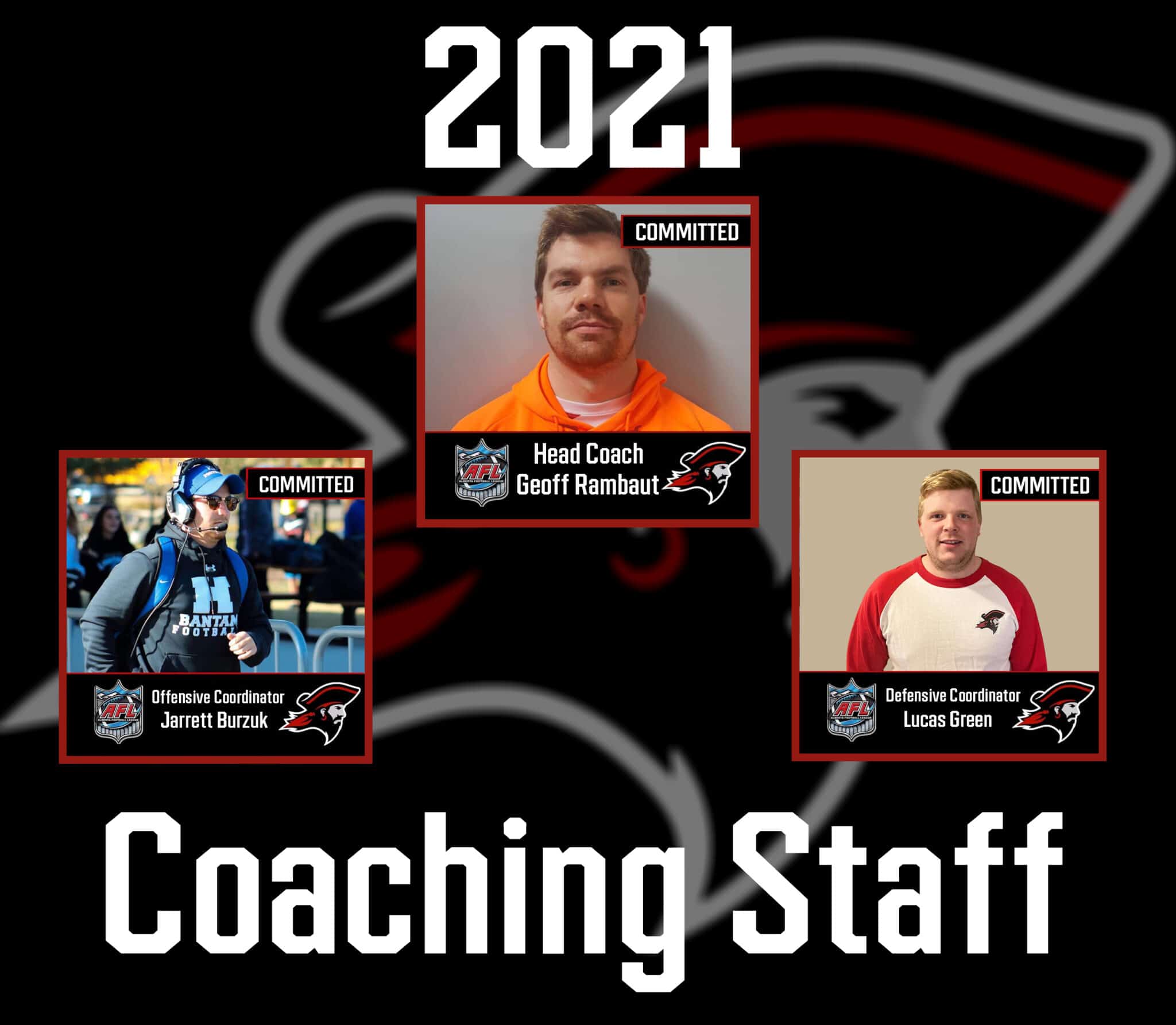 A product of Sylvan Lake High School, Rambaut enjoyed a successful playing  career with the Lakers helping them to a Rural League Championship as well as two Central Alberta Championships. He went on to play three seasons with the Bucs before earning a spot on the University of Alberta Golden Bears. Rambaut moved back to Sylvan Lake after graduating from the U of A and became an assistant coach for the Lakers. During his tenure the team won numerous league titles and one provincial title.

Rambaut remained with the program until 2014 when he transitioned into the Offensive Coordinator role for the Sylvan Lake Pee-Wee team. Once again, Rambaut’s squad enjoyed success in the form of a league championship and their first provincial title.

In 2016 Geoff moved on to become the Offensive Coordinator of the Sylvan Lake Lions program and helped coach them to their first league final. In 2018 he was promoted Head Coach, and the Lions earned their first league championship. A staple in the Central Alberta coaching community, Coach Rambaut returns to the Buccaneers hungry to add an AFL championship to his resume. In addition to head coaching duties, Rambaut will help a veteran leadership group run the defence.

On offence, Jarrett Burzuk steps in to lead the offence he knows so well from a different spot on the field. As the starting quarterback in 2019, Burzuk led the Bucs to the AFL Final and earned AFL Offensive Player of the Year honours in the process. He was hurt in the final but managed to throw a go ahead touchdown strike on one leg before being forced to leave the game.

After an extensive minor football career, Burzuk spent four seasons playing for the Bucs culminating in last year’s AFL final performance. He began coaching in 2014 with the Red Deer Peewee Steelers as well as helping part time at Hunting Hills High School for both the Bantam and High School teams.

In Spring 2014 he was named quarterbacks’ coach for the Battle River Shock (Camrose). He is going into his second year coaching on the Team North Senior Bowl staff and will be coaching the Zone 4 Summer Games team as Offensive Coordinator, Quarterbacks’ and Running Backs Coach.  He is also one of three quarterbacks’ coaches at The Dome Red Deer as a part of the School of Football Development Program. Burzuk is hungry to take the Bucs to the next level and believes the right personal is in place.

“My coaching philosophy is, I want the guys to have fun and work hard and I want to help the Central Alberta Buccaneers develop into the most competitive, hard-nosed team in the province. I want to see the Bucs take home an AFL championship, and a National Championship. I am looking to develop our offence into the top offence in the AFL both in rushing and passing. We have some fantastic players joining us in 2021 to help achieve these goals!” Burzuk said.

Defensive Co-ordinator Lucas Green steps into a coaching role for 2021 as he takes a break from an extensive playing career.

Green grew up playing halfback and linebacker in Sylvan Lake before graduating high school in 2011. From there Lucas went to the Edmonton Army Football team of the AFL where he played linebacker and wide receiver until they folded.

That is when we were lucky enough to snag Lucas for a two year stint at linebacker until an injury forced him to take a few seasons off. He returned in 2019 and was a key part of the defence which helped the Crew make the 2019 AFL Final.

Green steps into the DC role with a complete understanding of what the defence aims to accomplish and years of experience against AFL offences. These three men are ready to lead the Buccaneers through the 2021 season!