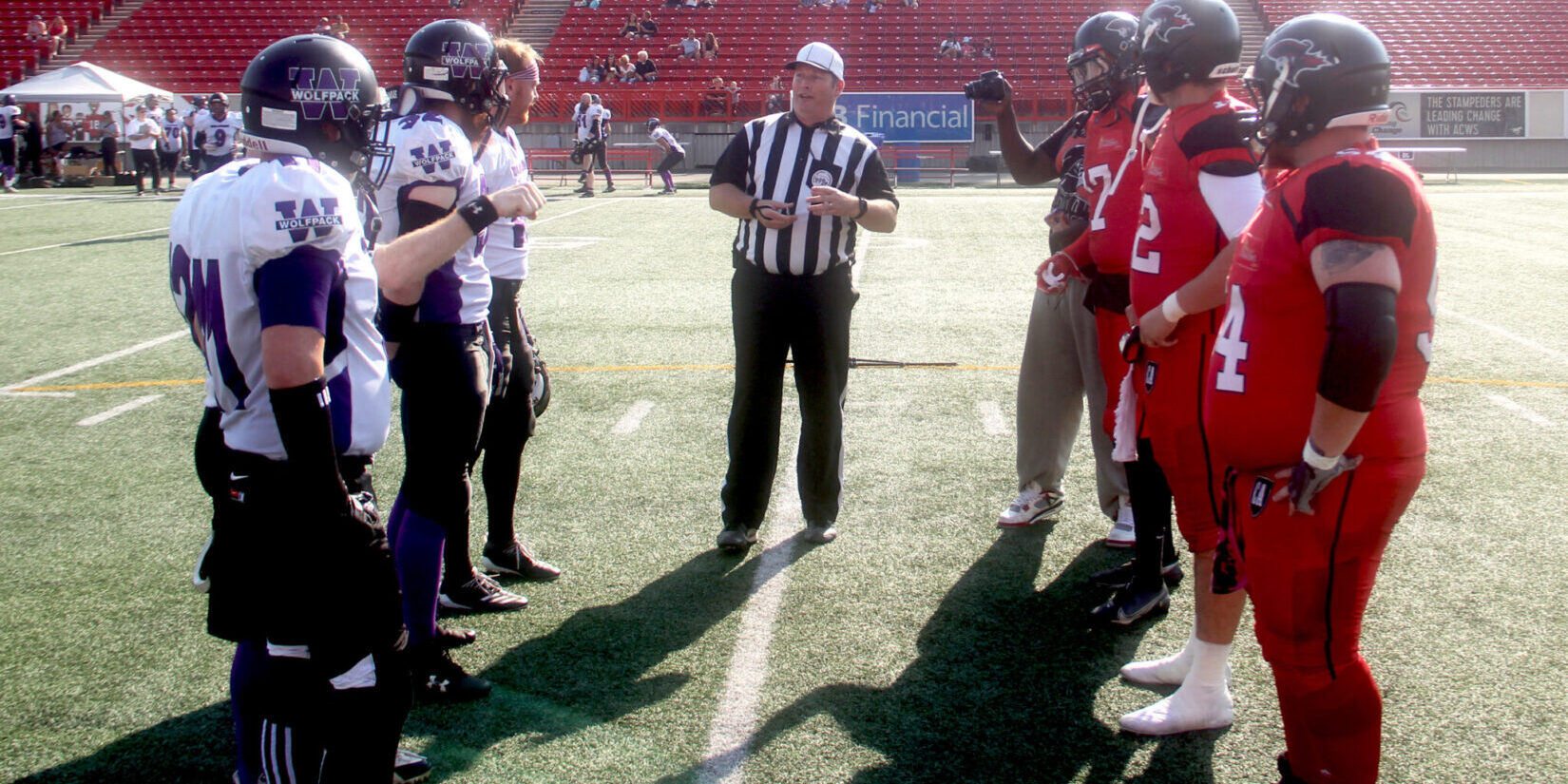 The Central Alberta Buccaneers are 1-0 thanks to a dominant aerial attack.

Two years since last taking the field due to the pandemic, the Buccaneers returned to action Saturday against the Calgary Wolfpack at McMahon Stadium.

“I felt we played well, especially at the beginning of the game. First drive, we go out, it’s a three play series and we score a touchdown. I haven’t played for three years, a lot of these guys haven’t played for the same amount of time. We all had pre game jitters. The fact we were able to start on such a strong note was awesome,” Brandon Leyh said. “There’s lots to work on, but it was a good effort.”

Defensively, the Crew came out of the gates firing and ready to play. Defensive back Mark Fay delivered the games first big hit on just the third play from scrimmage, spurring his group to stall Darryl Leason and the Calgary offence at the 25.

The offence quickly went to work. On just their second play from scrimmage, Brandon Leyh found Johannesson on a corner route deep downfield. One play later, Leyh threw it up for Hnatiuk, who walked the tightrope in the endzone to stay in bounds for the game’s first score. Soon after, the Elder Leyh found his brother Matthew Leyh for their first completion as a QB-Receiver duo, and a touchdown. Then Johannesson got in on the action again with his first touchdown.

On the defences second time onto the field, Fay provided the game’s only interception just a few plays into the drive. He finished the contest with one pick, two knockdowns, and four tackles.

The offence continued to roll with the only blemish throughout the contest coming in the form of touchdowns taken off the board due to penalties. These are mistakes the quarterback believes his group must correct if they are going to win big games.

“Two massive plays called back on penalties. One of them was offside on the field side wideout which is inexcusable, the other I didn’t see so I can’t comment on, but those are killers. Those are going to be the difference between a win and a loss in the big competitive games,” B. Leyh said.

Penalty trouble aside, the offence moved the ball at will in the first half and went into the tunnel with a 34-14 lead.

In the second half, Calgary’s offence led by Leason provided a pushback, but nothing could take the wind out of the Buccaneers sails. Long drives resulting in touchdowns were counter punched by 60 bombs downfield to  Johannesson, or Lawrence, and the offence was able to nickel and dime when there was nothing downfield.

Hnatiuk took a curl for 60 yards, Braydon Epp made a sure handed catch between defenders for a first down, and Lawrence made defenders miss multiple times after catching passes within 10 yards.

The Wolfpack however would not go away as they continued to find ways to move the ball on the Buccaneer defence throughout the second half. They managed to sustain three long drives, putting 20 points on the board in the half.

It was not enough to muster a comeback with the Bucs offence picking up where they left off. Lawrence picked up one of his touchdowns in the half on a laser beam of a throw 60-yards down the middle of the field, Johannesson walked into the endzone for the third time, and the offence closed out the 55-34 Week 1 win.

Johannesson finished the contest with seven receptions for 228 yards and three TDS, Lawrence picked up nine catches for 198 yards, and Hnatiuk carried the rock 140 yards over seven receptions.

“It was just amazing (to be back playing football) like I said we had pre game jitters going out there after the whole covid season. I was a little anxious to get the first hit out of the way, and that didn’t happen until the second quarter, but as soon as I got hit I was fully in the game and just rolling. There’s lots to clean up, but it was just awesome,” B. Leyh said.

Up next, the Buccaneers are home to the Airdrie Irish on July 24 in their home opener. Kickoff is at 6 p.m. at Great Chief Park in Red Deer.