Complete game spurs Bucs to 2-0 record ahead of Bye. 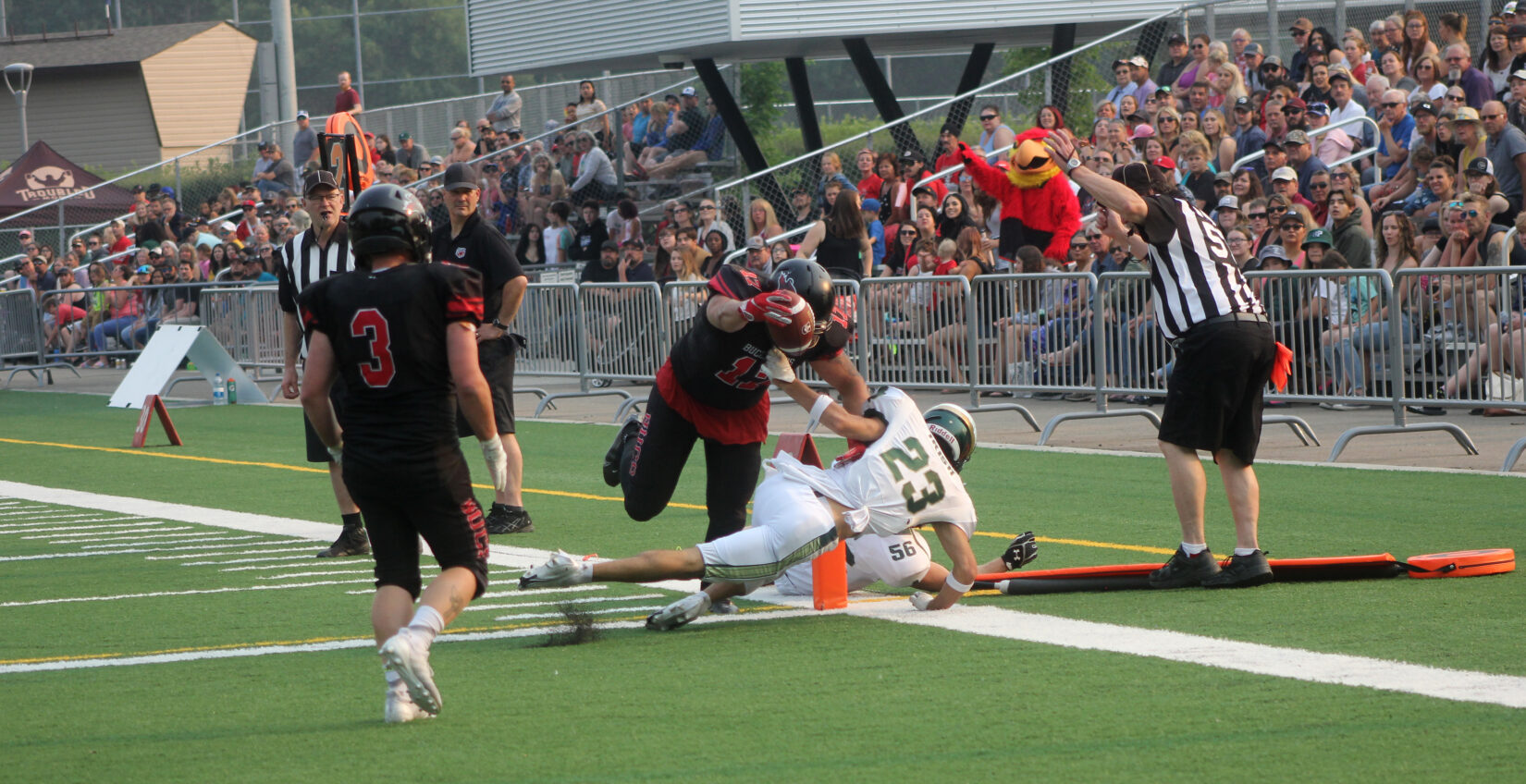 There was no letting off of the pedal this time.

The Central Alberta Buccaneers put on a show for their fans with a 43-6 win over the Airdrie Irish in the club’s home opener this past Saturday.

Quarterback Brandon Leyh was solid for the second week in a row, going 22 of 28 for 361 yards and adding six touchdowns, and the defence held a shutout until late in the fourth quarter as the Bucs improved to 2-0 on the AFL season.

“This was much better than last week. We had a lot of areas to get better in and we improved a lot. We broke our game down, critiqued it all, repped a lot in practice and then came out and did exactly what we wanted to do,” said Head Coach Geoff Rambaut.

Leyh picked up where he left off a week prior, with two touchdown passes to brother Matthew Leyh early. Receiver Ben Hnatiuk extended the Bucs lead with his first of two touchdowns late in the half.

Meanwhile, the Buccaneers defence was firing on all cylinders. Their defensive line lead by Ian Keetch contained Josh Williams, the usually mobile Irish quarterback, and the secondary took care of everything through the air. The Irish failed to score in the half and the Buccaneers took a 22-0 lead into the locker room.

“We played a different t style team this week, and we were able to adjust and work on some of the things we needed to fix in our own game. The Wolfpack were a good team but we beat ourselves a lot and have up a lot of yards we probably shouldn’t have. We fixed that this week,” Rambaut said.

There was no complacency in the second half as the defence came firing out of the gates. With Williams hoping to find his target on a post route deep downfield just a few plays into the third quarter, defensive back Dario Viveros made a good play to come down with his first interception of the season.

“I saw the quarterback look the other way and quickly look back my way, so I thought I need to get over top. I saw the receiver in my peripheral so I knew the ball was coming my way…. Then I just went up and got to it first, Viveros said.

The defensive line also continued its dominance in the second half. By the final whistle, a total of six Bucs laid hits on the Irish QB. Keetch and Travis Dietrich each picked up solo sacks, while Todd Lewis, Paul Jensen, Adam Kuntz, and Matt Misiewicz each recorded half sacks.

“We’re just out there trying to get the ball every play. We had some ball hawks out there and we were able to communicate well today. A lot of the guys are still learning in our defence but we did our job, that’s what matters,” Viveros said.

Despite a gutsy second half performance by the Irish defence, the Buccaneers aerial attack proved too much for their opponent for the second week in a row.

Leyh found Tylor Johannesson in the end zone once, Hnatiuk added his second of the night and Axsivier Lawrence added his lone touchdown reception to put the contest out of reach. Airdrie broke the shutout with their first score of the game with less than two minutes on the clock, but it was hardly enough to spoil Central Alberta’s homecoming.

The Bucs improve to 2-0 with the 43-6 victory, ahead of a crucial bye week. The group will get seven days to recover before turning their attention to preparing for their Aug. 7 contest against the Cold Lake Fighter Jets.

“It comes at a good time, being one of the first long weekends since covid, guys get to spend some time with their families, and it comes in the middle of the season so we get a little break to rest our bodies,” Rambaut said. “It’ll be good for us to get rested, assess film, and get prepared for the playoffs. There’s four straight games after this, and we have to bring it every week.”