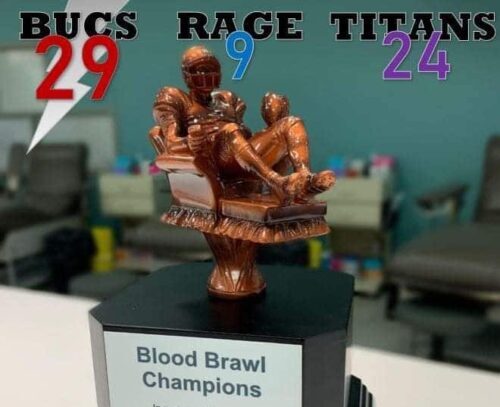 The Crew defeated Calgary Rage and Red Deer Titan in the third Canadian Blood Services Red Deer Blood Brawl between the three teams, over the course of the spring. Thanks to a flood of support from players, fans, alumni, and the families of players, the Buccaneers successfully donated a whopping 29 pints of blood. Though this was only the third contest against the Rage and Titans, it was our 20th blood drive in partnership with CBS as an organization.

Canadian Blood Services will be on hand at our home opener against the Airdrie Irish on July 24 to present the Bucs with the Blood Brawl Cup during a ceremony at halftime.

Simply put, the 62 pints of blood donated by the three teams will save lives. According to Canadian Blood Services, just one pint of blood can save up to three lives.

Though the drive has come to an end, the need for blood donation does not go away. Healthy adults who are at least 17 years old are eligible to donate every 56 days or once every two months. Appointments can be booked through the CBS App.

We would like to extend our sincerest thanks to everybody who donated on behalf of the Central Alberta Buccaneers to make this victory for the community possible, and we are looking forward to defending our Blood Brawl Champion status.